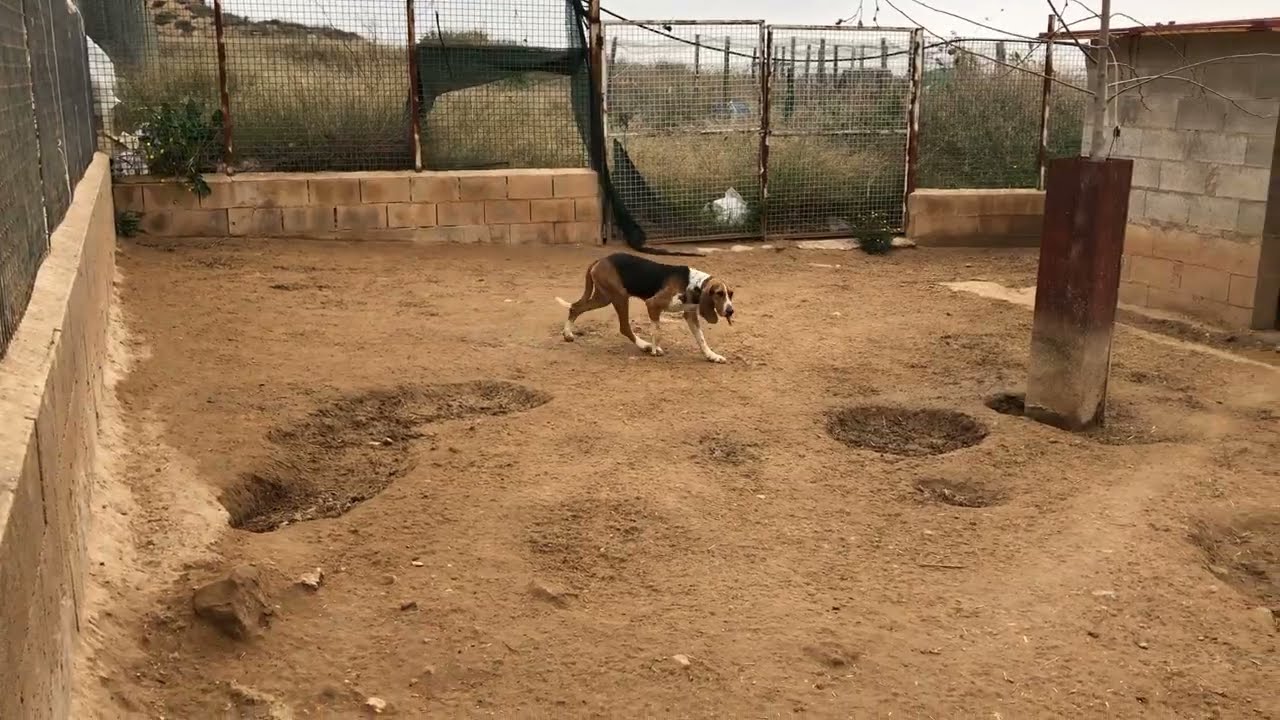 Casper meeting a new friend for the first time Victor

Life in a city/apartment : NOHome without an exterior : NOContact with other dogs : GOODLife with cats : NOContact with children : ?Need for daily exercise : AVERAGEHealth : LEISHMANIASISTrauma : YES
Special needs : PATIENCE AND Re-EDUCATION

History : Casper was delivered to our shelter by a hunter as he was no longer fit for hunting due to his fear. We can only guess why Casper is so scared, we don’t know. He may have grown up in a kennel without regular and loving social contact with humans, or he was tied to a chain without any care until he was released to the shelter.

Personality : We don’t know anything for sure, but now we have a dog here who is just scared and hasn’t gotten out of his shell yet, of course he still doesn’t know that no one in the shelter wants to hurt him. The caregivers he knows can touch him, but Casper still can’t relax, it shows that he is not used to it and that the situation makes him uncomfortable. Casper doesn’t let people he doesn’t know touch him and slips away from the situation. However, until now he has never shown any aggressiveness, biting is far from his behavior. In exceptional situations, for example when Casper had to go to the vet, he had to be cornered in order to catch him. So he crouches on the ground and prefers to make himself invisible. Poor thing, what happened to him that he has such an incredible fear of unknown people and situations? Now the volunteers have seen a ray of hope and we would like to tell the world about it: Casper already takes treats from the hand, but only when there is a fence between them. This is wonderful and we will definitely continue training, because we don’t want to abandon Casper completely and get him to learn to trust people little by little and to draw strength and courage from positive situations. Casper is not alone in one area, but he lives in the enclosure with a couple of other dogs. He gets along very well with them and orients himself towards them. The girls give him security, without them he would probably be much more fearful. With his male colleagues, Casper settles for sympathy.

We’re looking for : We would like Casper to go to a really experienced dog owner, preferably one who already has experience with fearful dogs. It would also be great if there was a first dog in his new home who would give Casper confidence and could give him a good example of everyday life with people. Casper absolutely needs a strong dog by his side, who on one hand is very sociable with him and on the other holds his hand. Casper is definitely not a dog for beginners who want to “try” him. In any case, it must also be taken into account that Casper belongs to a breed of hunting dogs. At the latest, when the ice is broken between Casper and his future family, he should exercise accordingly. This includes games of search and sniffing, the search for objects…Hounds like to work with their noses and are very active. Casper may not know it right now, or he may have forgotten it, but as soon as he realizes again that people aren’t monsters and they don’t want to hurt or scare him, his needs will have to be taken care of. Casper’s future family must be prepared to gently but steadily work with him on his fears and not expect too much of him at first. We would be delighted to find exactly those people who are confident in winning Casper over and who have all the time in the world to make Casper a happy and confident dog again. If you are exactly this person, do not hesitate to contact us.